Being able to quickly and safely maintain your instrumented safeguards is essential to maximizing process uptime. Maintenance facilities and procedures should always be factored into front-end loading estimates for instrumented safeguards. However, it is likely that many sites have encountered projects, where provisions for maintenance, test and repair were treated as an afterthought.

The failure rates assumed during the verification of the risk reduction are based on the timely performance of the routine planned preventive maintenance (PPM). The reliability of an instrumented safeguard also depends on the scope and timing of periodic inspections and the timeliness of any needed repair when a fault is detected. Procedures and maintenance facilities can be needed shortly after start-up, as early failures are found and planned maintenance work begins.

An effective plan for instrumented safeguard maintenance can impact: 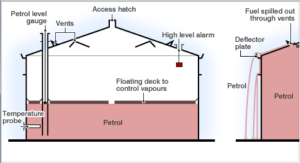 Gasoline was being delivered to the tank on the day before the incident. Early the next morning, the Automatic Tank Gauging (ATG) system displays an unchanging level, although the tank continued to fill. By practice, the operator controlled level by terminating transfer upon receipt of the user alarm. However, the ‘user’, ‘high’, and ‘high high’ level alarms used the same transmitter, so the failure of the shared transmitter rendered these alarms inoperative. Since the alarm never activated, the operator did not take action to terminate transfer.

An independent high-level switch, set above the ATG high-high level, was designed to close inlet valves and activate an audible alarm, but it also failed. The high level switch had been disabled when the maintenance organization, due to lack of understanding of the relatively new technology and to insufficiently detailed procedures, did not reinstall a lock on the switch test arm. Without the lock, the level switch was not activated when the float was lifted. By late afternoon, the tank overfilled and contents spilled out of tank roof vents. A vapor cloud was formed and noticed by tanker drivers and by people outside the facility. The fire alarm was activated and firewater pumps were started. An explosion occurred a short time later, likely ignited by the startup of the firewater pumps.

It is critical to train maintenance staff to properly test equipment and to verify that the equipment has been properly returned to service. The fault response and repair procedures should include a check for unacceptably high failure rates. Written instructions should be provided on how to escalate these situations to maintenance and facility leadership for investigation and correction.

In the above case, a control instrument with abnormally frequent failures (a maintenance “bad actor”) went unreported. The only independent safeguard failed due to an instrument technology change that was not effectively incorporated into the maintenance program.