The Hazard and Risk Analysis establishes the preliminary risk management strategy. The supporting documentation contains assumptions related to automation reliability and the capability of on-site staff to sustain the system. Examples of common assumptions include:

Functional safety practices dictate that the site verify the  H&RA assumptions. IEC-61511:2016 requires the determination that the design, operation, maintenance, and testing are sustaining the safety integrity as required by the site risk management strategy. ANSI/ISA-18.2 requires that alarm events be monitored to ensure effectiveness of the alarm system. Gaps between the assumptions and reliability can have both direct and indirect impact on actual site risk. 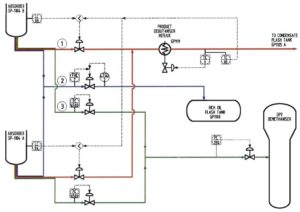 The LPG Plant 1 separated methane from LPG in a pair of absorber towers using lean oil. During the night before the accident, the level increased in the knockout section of Absorber B. Since the disposal route to Plant 2 was not available, an alternate route to a Condensate Flash Tank was used. The normal procedure of increasing absorber bottom temperature was not done. As a result, the flash tank protected itself from excessively cold temperatures by decreasing incoming flow, which in turn caused absorber condensate level to continue to increase. Eventually, condensate mixed with rich stripping oil. This mixture flashed across the level control valve and lowered the temperature in the Rich Oil Flash Tank. Temperatures throughout the plant were lowered as rich oil flowed through the process. A low temperature trip of the lean oil pumps resulted, and the trip was not communicated to the plant supervisor for over an hour. A hand switch was actuated to decrease flow through exchanger GP905 in an attempt to restart the pumps. The heat exchanger ruptured due to cold temperature embrittlement, releasing a vapor cloud of gas and oil. The cloud traveled 170 meters to fired heaters before ignition occurred.

Alarm management reduces the number of alarms to only those requiring operator action. The risk reduction that normally results from a robustly managed safety alarm program is fully dependent on timely and correct operator response to the alarms. Having chronically high process alarm rates in a facility or a significant number of alarms which do not require action will promote the development of ineffective alarm response habits. [ANSI/ISA 18.2]

As in most large events, there were many contributing factors. Among them were two significant deviations from common H&RA automation assumptions:

With these deviations from standard H&RA assumptions, any Operator Response to Alarm protection layer would be very unlikely to succeed.

Audit to confirm that the assumptions made during hazard and risk analysis are actually reflected in plant operation and that these assumptions remain valid over time.